As I read the lines of this poem, I had to ask myself whether I am really following and loving Yeshua every day in all circumstances?  How about you?  Every person who calls himself or herself a believer in, and thus a follower of, Yeshua is called to do more than simply make that declaration.  We are all called to a life of discipleship.  “Discipleship” means “imitator”.  As the poem summarizes and as scripture says, we are to imitate (follow, serve) and love Him who would have sacrificed His life even if each of us had been the only person living.

Yeshua’s call in the following Scriptures is often interpreted as being a call to salvation.  In reality, He was calling Andrew and Peter to a life of discipleship.  He was calling them to become imitators of Him, of everything He taught and lived.  In Yeshua’s day, this is how the disciples, the followers of most teachers/rabbis were taught.

As He was walking by the Sea of Galilee He saw two brothers, Simon (called Peter) and Andrew his brother, casting a net into the sea (for they were fishermen). He said to them, “Follow me, and I will turn you into fishers of people.”  They left their nets immediately and followed Him.   Going on from there He saw two other brothers, James the son of Zebedee and John his brother, in a boat with Zebedee their father, mending their nets. Then He called them.  They immediately left the boat and their father and followed Him.” (Matt 4:18-22 NET)

As He went along the Sea of Galilee, He saw Simon and Andrew, Simon’s brother, casting a net into the sea (for they were fishermen).  Jesus said to them, “Follow Me and I will turn you into fishers of people.”  They left their nets immediately and followed Him.  Going on a little farther, He saw James, the son of Zebedee, and John his brother in their boat mending nets.  Immediately He called them, and they left their father Zebedee in the boat with the hired men and followed Him. (Mark 1:16-20 NET)

Then He said to them all, “If anyone wants to become My follower, he must deny himself, take up his cross daily, and follow Me. (Luke 9:23 NET)

Have you acknowledged that Yeshua died for you?  If not, do so immediately.  It is simple.  In your own words tell Him you are sorry for your sins and ask Him to be your Savior.  Once you do, start imitating Him in every area of your life rather than living as the world lives.

If you do call Yeshua your savior, are you imitating Him or living as the world lives? Start imitation Him today!  That is my commitment—to imitate Him to the best of my ability as I allow Him to enable me.  How about you?

Until next time…May the LORD bless and protect you…May He give you Shalom.” (Numbers 6:24-26)

*Poem is by Mrs. Cecil F. Alexander, as quoted in Amazing Grace: 366 Inspiring Hymn Stories for Daily Devotions; 11/29.  It was written in 1852 to compliment one of her husband’s sermons, which was preached on the last Sunday of November 1852.

The Light of the LORD

THE LIGHT OF THE LORD

LORD, fill the world with Your light, the Light of Yeshua!

May Your light shine like the sun on a bright, clear day;
Like  the full moon on a clear night.

Fill me with Your light, LORD!

May Your light shine on the world through me;
May I never obscure the illumination of your light;

That all who You bring across my path will be drawn to You and  be encouraged!

Quotable Quote: “In short, Israel is the Jewish State:  it breathes life into the core values of the Bible by helping the people around the world who need it most.”  How?  In many ways, but a major one is helping others around the world from providing emergency medical relief to earthquake victims in Haiti, to teaching Senegalese lettuce farmers to use advanced drip irrigation, to sending emergency medical clinics to combat Ebola in Western Africa. This work is viewed as a moral duty based on Jewish values.  These values come from the teachings known as God’s Torah (what we often call God’s law).    (Quote is by Susan Michael, US Directory, ICEJ, as stated in an article in the Oct, 23016 issue of the ICEJ Word From Jerusalem entitled “Your Israel Answer: What Does Israel Do for the World?”)

After the Storm, Comes the Calm”

“After the storm comes the calm” (Matthew Henry)

I’m just sittin’ on my back porch in Cary, NC, enjoying the sunshine and listening to the wind in the trees as the remnants of Matthew high-tail it out to sea.  A lot more peaceful than yesterday when Matthew whipped along the coast like a lion or wild boar on the rampage, continuing its path of destruction. I haven’t checked the weather, but I’m confident the sun is shining up and down most our coast this morning.

In my yard, everything is fine,
no trees down for me,
just a lot of small branches to see,
and leaves to blow;
just a little water seeped under the first-floor wall,
but no woe.
Nothing more than an inconvenience.

(OK, so I’m not a poet.) I pray that all of you reading this who felt Matthew’s furry had the same, or better, result. However, others have not been so fortunate in our area and throughout Matthew’s course. While we count our blessings, let us not forget to pray for those who were not as fortunate.

AWESOME PRAYER EVENT WAS HELD IN RALEIGH, NC:  There was an awesome event at Memorial Auditorium last night that won’t be reported in the press.  It was a great time of praise & prayer, repentance & renewal attended by a diverse representation of Believers across cultures and various expressions of faith in Yeshua.  We saw the church in action as it should be.  There was a unification of the Body in Love that was orchestrated by our Father in Heaven.  God built more of His church last night!  May it continue…

Ephesians 2:15–22 (NET) “He did this to create in himself one new man out of two [Jew and Gentile], thus making peace,  and to reconcile them both in one body to God through the cross, by which the hostility has been killed…So then you are no longer foreigners and noncitizens, but you are fellow citizens with the saints and members of God’s household, because you have been built on the foundation of the apostles and prophets, with Christ Jesus himself as the cornerstone. In him the whole building, being joined together, grows into a holy temple in the Lord, in whom you also are being built together into a dwelling place of God in the Spirit.” 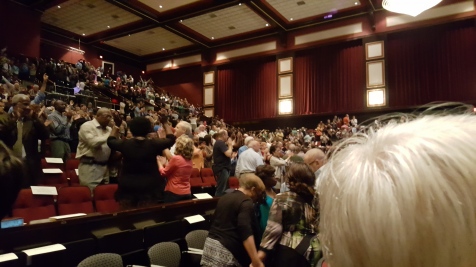 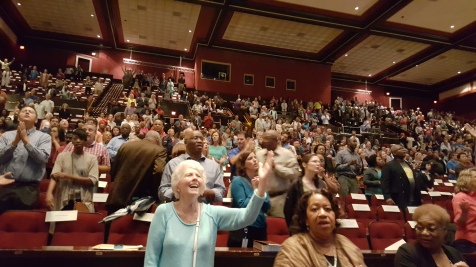 Traveling to Guayaquil, Ecuador tomorrow!  Looking forward to a week telling others about Jesus and helping them start their walk with the Lord as they form a new body of Believers.  Please pray for our team — for smooth travel, safety in Guyaquil, and that many will be touched by the Holy Spirit.  I am confident there will be many divine encounters with Believers and non-believers alike.  Pray not only for salvations, but for spiritual and physical healing as well.

I hope to be able to post mission updates on this blog during the week.  You can subscribe to automatic email updates at wjbsturn.wordpress.com.

A Cross in the Sky 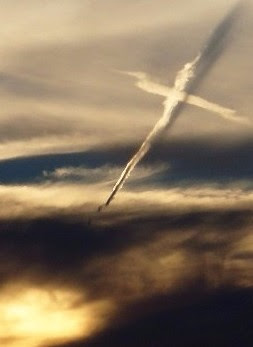 I would love to have seen it in person.  Instead, I’ll let D. Wright, who saw it with her husband and several others, give testimony to what they saw and felt.

The photograph was taken by my husband John, while we were standing at a beach watching the sun go down -in Dunedin, Florida!  Nothing was added or enhanced.  It was an absolutely glorious evening with billowing clouds glowing with the ending of a day.  We had been standing-completely in the opposite direction -when we decided to turn around and were stunned by the cloud formation above!

The response around us by others there- was the same as ours- fingers pointing upward, cameras out and awestruck! The manifestation in that sky dissipated very slowly.  It was as though God was giving time for the souls to process what they were seeing…I know mine was!

Jesus was visiting that beach, calling for souls to look up…to remember He came, He died so we might be saved! I was such a sobering sign and we could not begin to figure out “how” it was formed! It was a “God breathed” cloud formation!

The photo did not capture fully everything we saw -for the bottom tip of the cross extended into the spot of light below like a spear. It was as though the Cross was piercing the dark clouds to open Light!

John 8:12 [ The Light of the World] Then Jesus spoke to them again: “I am the light of the world. Anyone who follows Me will never walk in the darkness but will have the light of life.”

I could not help but wonder what was in the hearts of those on this beach. Was there someone who had been crying out for God? Was someone on the brink of destruction? What happened in souls that evening when God gave a sign of Redemption – out of the clouds?

Anne Graham Lotz: I Believe We Are Living at the End of Human History

Anne Graham Lotz: I Believe We Are Living at the End of Human History (Interview)

This is a very good interview.  It is worth the time to read.  She makes some very strong statements addressing the upcoming elections, the transgender issue, and the state of our society and the world, that I believe are on-the-mark.